The long-awaited Law Commission Report on Marriage Reform was published on 19th July. Its recommendations are detailed and wide-ranging, but what do they mean for independent celebrants in England and Wales?

You can download the full report, a summary of the report and an ‘at a glance’ version of the report here if you would like to examine it in detail. But if you don’t feel like wading through all 471 pages right now, here are some points that we at the Celebrants Collective think will be most pertinent to independent celebrants.

What will the new law be?

To start with, it’s important to remember that this report contains recommendations only. Though it has been thoroughly researched over a period of several years, it is not law and neither is it definitely going to become law. In fact, it isn’t even yet a bill.

The Law Commission’s report has been presented to the government, who have to respond within a year (and give an interim response within 6 months). Even if everything is accepted exactly as it is and a bill is passed, changes will take quite some time to come into effect.

However, what we can do is to look at the recommendations and how they would affect independent celebrants in England and Wales if they were to become law.

Our busy community of worldwide celebrants includes folk from places like Australia and the USA, where they can do the legal part of weddings, as well as people from Scotland, where it’s possible to do them, but under a more complicated beliefs-based system. So we’re lucky to have their experience to help us on our journey.

OK, but are independent celebrants likely to be able to deliver legal marriages in the near future?

We don’t know yet. The report recommends that either it is rejected in full or accepted in full but, in practise, there may well be a few modifications along the way.

In fact the part of the report that is most in question is, in fact, around independent celebrants (or officiants, as they’re referred to a lot) and indeed Humanist celebrants – every time they are referred to, it is always couched by the words ‘if permitted by the government to conduct weddings’.

So there is a chance that lots of the recommended changes could be made, but independent celebrants still won’t be able to conduct legal weddings.

However, it does look promising.

Let’s say it all goes ahead, what would the main change be?

When you say ‘almost’ anywhere, what do you mean?

If we are allowed to officiate at weddings, we’ll have to check that they are suitable for that wedding, in terms of health and safety and that it’s dignified (which is a word that comes up a lot…) But we won’t be held liable if something does happen.

Will I need any kind of certification? Will I have to retrain??

The government are concerned with our being able to do the legal part correctly. The ceremonial part will be up to the couple and the officiant. So they will not be looking for specific celebrant training, or any qualification.

What independent celebrants will need to do is apply to the General Registry Office (GRO) to become a licensed officiant. In order to be approved, they must be deemed ‘fit and proper’, they must be over 18 and not have a criminal record.

Then there will be training in the procedures to ensure that the legalities are done properly. This will be from the GRO initially, but it might also be given to other training providers too – this is as yet unclear. There is mention of an expectation of ongoing training too, although again this is not detailed.

How much will it cost to become a licensed wedding officiant?

No mention of costs is included in the report, but almost certainly there will be a financial investment to make. This was a question that was asked in the scoping paper, and most celebrants indicated that they expected/would be prepared to pay up to £500 for licensing, so that could be taken into consideration.

Will we have to do all the checks that people are who they say they are and so on?

No. The GRO will take care of the preliminary checks and then issue the couple with a marriage schedule. Their schedule will include who they want to officiate at their wedding, and it is the schedule that they will sign in order to be legally married.

Will we be restricted on what we can include in a ceremony?

The only requirement is that there is a clear expression of consent to marry from both parties, but this can be worded in a way to suit the couple. There are no other restrictions on wording.

Will I still be able to include religious or spiritual content in a wedding, if the couple wants it?

Yes. So long as it is made clear that you are a civil officiant during the ceremony. We won’t be allowed to use rituals or vows that are taken from religious liturgy however - the traditional Church of England vows couldn’t be used word for word, for example.

But songs, prayers, readings, music… any other religious or spiritual content like that can be used (if the officiant is comfortable with it of course).

Will we have to charge a certain amount?

There is a section in the report saying that independent officiants are free to make a profit (it’s more of a grey area with the belief-based route, including Humanists). So it’s likely that our pricing will continue to be influenced by market forces rather than government guidelines. And the market will probably get more competitive.

Sounds pretty positive so far – are there any downsides?

It is positive! But of course, there’s a long way to go and lots could happen.

However, it’s important to remember that, even if things don’t change, we have a track record of delivering bespoke, personal weddings to couples who value them. So we will carry on, gloriously doing our thing!

Some downsides could be for celebrants who only do a small handful of weddings per year. Depending on the fees, it might be difficult for them.

There would also likely be a big surge in celebrants competing for weddings but again, this is something that exists at the moment and actually gives couples a fantastic range of choice.

There would inevitably be some more admin and training to do.

There would be a lot more scope to offer micro weddings and elopements for example, as well as working collaboratively with other wedding suppliers, giving couples amazing options.

AND we would finally be free of the ‘but it’s not a proper wedding’ question!

So… watch this space and let’s keep the conversation open! 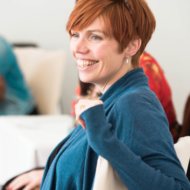 Claire is an award-winning celebrant and trainer who gets ridiculously excited about creating rites of passage ceremonies that tell great stories and reflect the people they’re about. As co-director of awesomeness and celebrant training for the Celebrants Collective, she also gets ridiculously excited about training people to do the best job in the world. (Actually, it would be fair to say that Claire has a tendency to get ridiculously excited about all sorts of things, including chocolate, Kung-Fu, 80s pop music and a well-brewed cup of tea, but that’s another story…)
Claire is lucky enough to live by the seaside in sunny Worthing, on the south coast of England, with the gorgeous Team Bradford and their ‘fragrant’ rescue dog, Stanley.